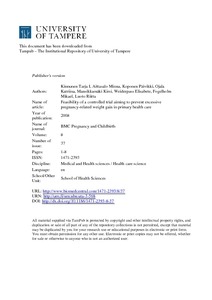 Excessive gestational weight gain and postpartum weight retention may predispose women to long-term overweight and other health problems. Intervention studies aiming at preventing excessive pregnancy-related weight gain are needed. The feasibility of implementing such a study protocol in primary health care setting was evaluated in this pilot study.

A non-randomized controlled trial was conducted in three intervention and three control maternity and child health clinics in primary health care in Finland. Altogether, 132 pregnant and 92 postpartum women and 23 public health nurses (PHN) participated in the study. The intervention consisted of individual counselling on physical activity and diet at five routine visits to a PHN and of an option for supervised group exercise until 37 weeks' gestation or ten months postpartum. The control clinics continued their usual care. The components of the feasibility evaluation were 1) recruitment and participation, 2) completion of data collection, 3) realization of the intervention and 4) the public health nurses' experiences.

1) The recruitment rate was slower than expected and the recruitment period had to be prolonged from the initially planned three months to six months. The average participation rate of eligible women at study enrolment was 77% and the drop-out rate 15%. 2) In total, 99% of the data on weight, physical activity and diet and 96% of the blood samples were obtained. 3) In the intervention clinics, 98% of the counselling sessions were realized, their contents and average durations were as intended, 87% of participants regularly completed the weekly records for physical activity and diet, and the average participation percentage in the group exercise sessions was 45%. 4) The PHNs regarded the extra training as a major advantage and the high additional workload as a disadvantage of the study.

The study protocol was mostly feasible to implement, which encourages conducting large trials in comparable settings.