Does neuregulin-1 play a role in Type A behavior? The cardiovascular risk in young Finns study 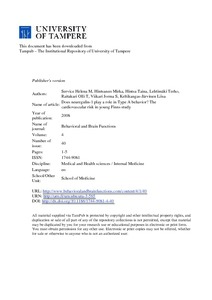 Neuregulin-1 proteins are related to physiological correlates of Type A in terms of cardiac reactivity. Furthermore, neuregulin-1 gene (NRG1) may play a role in cardiovascular disease such as atherosclerosis and coronary heart disease i.e. the suggested "outcomes" of Type A behavior. Therefore, NRG1 is hypothesized to be associated with Type A behavior.

The study examined whether Type A behavior pattern is associated with the single nucleotide polymorphism (SNP) SNP8NRG221533 of the NRG1. The subjects were 631 men and women participating in the population-based Cardiovascular Risk in Young Finns study in 1992 and 2001. Type A was self-assessed with the Framingham Type A Scale and reassessed nine years later.

Type A was associated with NRG1 genotype. Carriers of genotype CC scored lower on Type A compared to the others.

Our study has pinpointed a SNP in NRG1 that predicts Type A behavior. As previous evidence suggests an association for NRG1 with beta-adrenergic stimulation, its role underlying Type A is discussed.