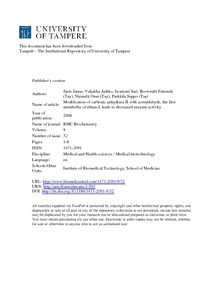 Acetaldehyde, the first metabolite of ethanol, can generate covalent modifications of proteins and cellular constituents. However, functional consequences of such modification remain poorly defined. In the present study, we examined acetaldehyde reaction with human carbonic anhydrase (CA) isozyme II, which has several features that make it a suitable target protein: It is widely expressed, its enzymatic activity can be monitored, its structural and catalytic properties are known, and it contains 24 lysine residues, which are accessible sites for aldehyde reaction.

Acetaldehyde treatment in the absence and presence of a reducing agent (NaBH3(CN)) caused shifts in the pI values of CA II. SDS-PAGE indicated a shift toward a slightly higher molecular mass. High-resolution mass spectra of CA II, measured with and without NaBH3(CN), indicated the presence of an unmodified protein, as expected. Mass spectra of CA II treated with acetaldehyde revealed a modified protein form (+26 Da), consistent with a "Schiff base" formation between acetaldehyde and one of the primary NH2 groups (e.g., in lysine side chain) in the protein structure. This reaction was highly specific, given the relative abundance of over 90% of the modified protein. In reducing conditions, each CA II molecule had reacted with 9–19 (14 on average) acetaldehyde molecules (+28 Da), consistent with further reduction of the "Schiff bases" to substituted amines (N-ethyllysine residues). The acetaldehyde-modified protein showed decreased CA enzymatic activity.

The acetaldehyde-derived modifications in CA II molecule may have physiological consequences in alcoholic patients.