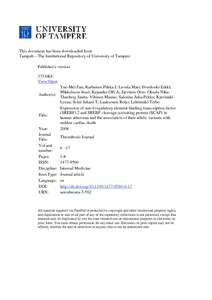 Disturbed cellular cholesterol homeostasis may lead to accumulation of cholesterol in human atheroma plaques. Cellular cholesterol homeostasis is controlled by the sterol regulatory element-binding transcription factor 2 (SREBF-2) and the SREBF cleavage-activating protein (SCAP). We investigated whole genome expression in a series of human atherosclerotic samples from different vascular territories and studied whether the non-synonymous coding variants in the interacting domains of two genes, SREBF-2 1784G>C (rs2228314) and SCAP 2386A>G, are related to the progression of coronary atherosclerosis and the risk of pre-hospital sudden cardiac death (SCD).

Whole genome expression profiling showed a significant (p = 0.02) down-regulation of SREBF-2 in atherosclerotic carotid plaques (types IV-V), but not in the aorta or femoral arteries (p = NS for both), as compared with the histologically confirmed non-atherosclerotic tissues. In logistic regression analysis, a significant interaction between the SREBF-2 1784G>C and the SCAP 2386A>G genotype was observed on the risk of SCD (p = 0.046). Men with the SREBF-2 C allele and the SCAP G allele had a significantly increased risk of SCD (OR 2.68, 95% CI 1.07–6.71), compared to SCAP AA homologous subjects carrying the SREBF-2 C allele. Furthermore, similar trends for having complicated lesions and for the occurrence of thrombosis were found, although the results were not statistically significant.

The results suggest that the allelic variants (SREBF-2 1784G>C and SCAP 2386A>G) in the cholesterol homeostasis regulating SREBF-SCAP pathway may contribute to SCD in early middle-aged men.