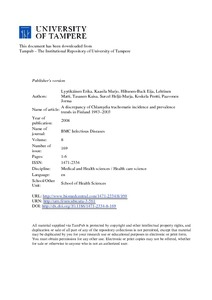 A random sample of 7999 women with two consecutive pregnancies within five years was selected from the population of the Finnish Maternity Cohort (FMC) serum bank stratified by calendar year and age. C. trachomatis IgG antibodies were determined by a standard peptide-ELISA. The reported incidence rates of C. trachomatis infections based on case notifications were obtained from the National Registry of Infectious Diseases (NIDR).