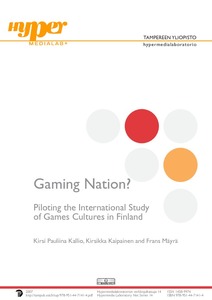 This is a study looking into how digital games are played in Finland. The present report is based on a survey of 805 Finnish respondents, 15-75 years of age, and it serves to provide a first quantitative overview of how different forms of play (traditional as well as digital ones) are organised in contemporary Finnish society on a more general level. This work is based on various qualitative studies of games and players, and it will also be followed by qualitative and in-depth studies of various player groups. The need for such research is related on societal and media changes: digital media, particularly the Internet and games are often claimed to be among the key arenas of information society. At the same time, in popular discussion and in media, digital games and game players are often depicted in simplistic terms, and most often they remain just framed within the debates of harmful media effects and game violence.

According to the findings of this study, the most commonly played digital game in Finland is computer version of classic card game, Solitaire. No single commercial video game or computer game series was close in popularity to Solitaire, which was the overall favourite of both men and women. Playing of other digital games appeared more unequally distributed between genders. Women’s second most favourite game was The Sims game series, which is a simulation game focused on different aspects of human life. On the contrary, men were more drawn towards strategy, action and sports games. But digital games were actually not the most popular type of games currently played in Finland.

After a principal component analysis of data which looked into playing habits of 17 different common types of games in Finland, a more high-level categorisation into four main game classes was produced. The category of traditional games contains board, card, problem-solving and outdoor games. Money games include lottery, betting and slot machine games. The third category of digital games consists of mobile phone games, computer games, online money games, console games and handheld console games. And finally, engrossment games include traditional, live action and online role playing games, miniature war games and collectible card games. During the last month 66 % of the respondents reported playing traditional games, 59 % money games, 31 % digital games and 4 % engrossment games. According to this, Finland can be described predominantly as an outdoors playing and betting country with love of classic types of card and board games, and where also digital game play is particularly focused on classic games such as Solitaire. The dominant media attention on digital gamers as fans of violent shooter games appears therefore rather one-sided.

This study also highlights the complexities involved in defining “gamers”, and points how problematic are claims that make sweeping statements concerning all gamers in general. Digital play appears in multiple forms and in varying levels of intensity. Many people appear to play occasionally various digital games without thinking themselves as “gamers”. It is possible to ask people about their relation to digital games and get different answers, depending on how the question is framed. On the basis of our analysis, it is possible to report the proportion of digital gamers in Finnish population to be as low as 29 %, or as high as 75 % (if everyone who ever has played any digital game is taken into account). Our suggestion is that a rather reliable estimate might be that currently c. 53 % of Finns can be described as digital gamers, in one way or another. More interesting than such general estimate, however, are the more specific forms that digital play takes among various groups of people.

The amount of play also differs greatly. An average figure reported by all our respondents is 1.8 hours of digital play time per week. But the most typical (median) figure is zero, since the largest group of Finnish respondents reported no weekly digital play at all. On the other hand, among those 53 % of respondents who could be categorised as gamers, the most typical playing time was two hours per week. In comparison, those who are self-acknowledged “game hobbyists” play on average 8.8 hours per week, and the most typical (median) response among them was five hours per week. These very active gamers of digital games were predominantly men (75 %) and almost four out of five of them were between 15 to 34 years of age. The intense playing of contemporary commercial digital games appears currently to be unevenly concentrated on young males. But, to challenge the stereotypes, there are also some female and older people who are fans of action games, and also the most casual, puzzle style games are sometimes played many hours per week.

This study includes detailed analyses of such background factors as education, occupational and family situation and living area, as well of those people who play digital games and those who do not play. No significant differences were found; in these terms, digital game player can be “anyone”. On the other hand, there were significant differences in age and gender, and digital game genres were gendered, meaning that men and women appear to play different kinds of games, with the exception of digital Solitaire, which is the most often played digital game among both men and women. Particularly younger men and women both appear to be often engaged in some form of digital play, but the intensive involvement typical of a “game fan” is mostly focused among young men. The popularity of digital play decreases in close relation to age, and differences between younger “digital gamer generations” and older, non-digital generations are clear. Nevertheless, there are many individual exceptions to this rule.

The final conclusions from this study are particularly focused on the concerns this kind of “digital games divide” evokes. Finland currently appears as a divided nation in terms of digital play: half of people play, half do not. The intense involvement in virtual game worlds appears even more unevenly focused on only young, predominantly younger people, while older people appear left out or uninterested in contemporary offerings from digital games industry. If such a cultural and social fracture continues to exist within the digital games cultures, it is not for the benefit of the future developments of digital gaming, nor is it for the benefit for the society and cultural life in general.