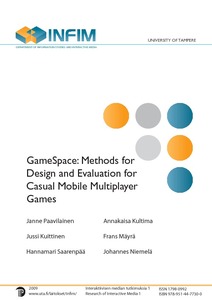 GameSpace was a new kind of a research project: it involved close collaboration between academic researchers and the game industry, and it looked at the methodological issues involved in game creation rather than focusing on a single game product or technology. The project was funded by the Finnish Funding Agency for Technology and Innovation (Tekes) and five industry partners. The GameSpace industry partners were Nokia Research Center, Veikkaus, TeliaSonera Finland, Sulake Corporation and Digital Chocolate. The project ran for over two years, from August 1st 2006 to September 30th 2008.
GameSpace looked at the design and evaluation of games that are characterised by three main features: they are casual multiplayer games in a mobile use context. The goals for the project were threefold:

• To analyse the playability criteria of a successful mobile multiplayer game - especially in terms of casual gameplay.
• To develop and evaluate game design methodologies suited for the aforementioned games.
• To develop and test gameplay evaluation methods suited for mobile game development and research.

On a broader level, the project could be divided into two major themes. The first theme was design space, involving the study of casuality, mobility and mobile use context. The first phase of the project mostly consisted of conceptual analysis where a deeper and clearer understanding of the design space was sought. This phase mostly focused on the phenomenon of casual games. The aim was to understand the specific features that make a game casual. Casuality in games has not been studied rigorously before, which made it an interesting and important research topic. The second theme was methodological study on exploring and researching new approaches and methods for designing and evaluating casual mobile multiplayer games. The second theme was called design research.
The research project was executed by a series of workshops in which the industry partners and the research team worked in collaboration. The workshop themes followed the design space and the design research topics. The first three workshops focused on ideation methods for casual mobile multiplayer games. In these workshops, the GameSpace research team iteratively designed different ideation methods which would be used in the process of game ideation. Later the ideation methods formed a complete package, which was tested by the industry partners during a three-month actual use period. The next two workshops focused on low and medium fidelity prototyping. The workshops focused on practical prototyping work with various casual mobile multiplayer concepts. The sixth workshop focused on using expert evaluation methods in mobile game evaluation. In addition to the evaluation workshop, the GameSpace research team was involved in various case evaluations for different games which we!
re evaluated with both expert evaluation and user evaluation methods. The case evaluation work was done in close co-operation with the IPerG -project (Integrated Project on Pervasive Gaming). The last workshop expanded the scope of GameSpace by focusing on the user experiences with different games and game related services. This last workshop acted as a stepping stone for upcoming research projects and it will be reported on elsewhere.
The project produced interesting new knowledge on all of the major research areas of the project. Especially the findings on the phenomenon of casual games and the exploratory work on methodological idea generation are leading edge in game research. The prototyping and the evaluation phases also produced new knowledge and the research team produced several conference articles from all these research areas. In addition to the conference articles, the project produced two master's theses. The project received good feedback from the industry partners and led to two continuation projects, SoPlay and GaIn .
This final report contains the knowledge acquired from the GameSpace project. Like the project itself, this final report is divided into two main sections: design space and design research. The design space covers the special characteristics of casuality, mobility and the multiplayer aspects. The design research focuses on game ideation, game prototyping and game evaluation methods. In addition to this final report, the research team will produce a Flash-based application which reflects the content of this report on a broader level.