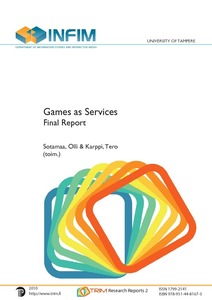 The ultra competitive nature of global game industry, characterized by spiraling production times and development costs, has in the recent times forced the game developers to search for alternative approaches. As a consequence, digital distribution systems, subscription-based models and micro-transactions have challenged the traditional circuits of game development, play and distribution. A common theme across the transformations ranging from persistent game worlds and casual games to automatic content updates and player-created content is that they make games, more or less, available "as services".

The need for a particular research project examining the rise of the service paradigm among game industry was identified already in relation the Neogames centre surveys conducted in 2007. The Finnish game industry representatives were widely aware of the change towards service-driven models but the individual game studios had no resources for a larger analysis. The practical objectives of the Games as Services (GaS) project are motivated from this background. The project, conducted in collaboration between the University of Tampere Department of Information Studies and Interactive Media (INFIM) and The Helsinki Institute for Information Technology (HIIT), has aimed at producing an overview on the nature of the service paradigm and its consequences to games, game culture and business. In addition, individual case studies have been conducted in order to shed light on particularly interesting subthemes.

During the project's timeframe (2008-10), the core themes of the GaS have only increased in relevance and visibility. The reasons for this are twofold. Firstly, the online games market of games, including subscription, digital game download, DLC, virtual commodities and value-added services is steadily expanding (PwC 2009). Secondly, with the advent of casual and social games, entirely new audiences have been introduced to digital games. Players are not so much asked to structure their lives to fit the demands of a game (Juul 2009). Instead, the games are increasingly designed to serve the players and to fit into their lives. In the age of "contextual gaming", play is increasingly tied to the practices and rhythms of everyday life and playful behaviors are often rooted in social relations and exchanges of information that are used to maintain and expand the networks of relationships (Mäyrä 2008).

Many signs indicate that the days of digital games packaged as "fire and forget" commodities are numbered. The global game industry is actively moving from providing discrete offerings towards establishing ongoing relationships with players (Chang 2010, 24). Not all games will be based on a constant update model, but even the more traditional releases will be transformed after the launch by patches, upgrades, expansions and modifications. The development budgets are forecast to reflect this change, as significant investments are moved from the launch to operating the ongoing service. The transitions described are not entirely unique to the games market but similar developments can be identified in other media markets. It is, however, noticeable how easily and successfully many sectors of gaming have already shifted towards a service-based economy. In this respect, all the traditional media industries have a lesson or two to learn from games as services (ibid.).