Entrepreneur's Choice of Tax Base: Earned or Capital Income 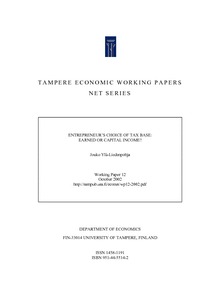 The determination of the entrepreneur’s tax burden in the dual income tax system is studied. The dual system taxes income from capital at a flat rate, but earned income at progressive rates. The media view claims the entrepreneur to be able to take his pay as favourably taxed income from capital. It is shown not to be supported by the recent data nor by deductive analysis in case of start-ups when (i) proper opportunity costs of the outside employment option and (ii) the financial capital tied in the company, (iii) the constraint on the maximum dividend taxed as capital income and (iv) the obsolescence of the tax surpluses (corporation taxes on undistributed profits) in the imputation system are taken into account. Instead it is shown to be optimal for the entrepreneur to raise dividends from his start-up also as earned income. Therefore, the entrepreneur’s tax equilibrium implies tax-indifference between raising the marginal euro from his company either in the form of dividend or capital gains income. Because the latter is double-taxed, the marginal tax rate on dividends as earned income must equal the average (and marginal) tax rate on capital gains. The split-rule into capital and earned income is shown to offer a minor incentive for supplying additional entrepreneurial effort, but the system itself discriminates capital formation of start-up enterprises in contrast to old capital from the past tax regimes. Finally, it is stressed how the previous tax system was tilted towards channelling income from the non-listed company to the household sphere in the form of wages and earned income while the dual income tax system tilts such reporting incentives towards income from capital without tax avoidance.