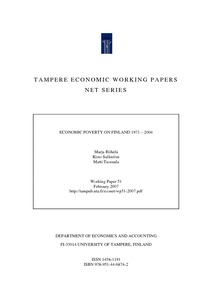 We have examined trends in the economic poverty in Finland using two data sources, the IDS (Income Distribution Survey) and the CES (Consumption Expenditure Survey). We have drawn on the recent literature on poverty analysis to analyse a range of poverty measures, using dominance conditions to rank the distributions of living standards. We ¯nd that poverty rate is the U-shaped curve over the period 1971 - 2004. As regards trends in poverty over time, the long-run perspective available from the CES indicates that from the early 1970s to the beginning of 1990s, the relative poverty rate has declined. The latter part of the 1990s and the early years of 2000s were clearly di®erent. We ¯nd that relative poverty rose over the period 1995 - 2004 for a very broad class of poverty measures and a wide range of poverty lines. Poverty rate, measuring poverty line 60 per cent from median income, was about 7 per cent (328 thousand persons) in 1990 and 11 per cent (557 thousand persons) in 2004. At the same time poverty has become more severe. We also found that since the mid 1990s the poverty rate among children has grown much faster than the poverty rate in the whole population. Whilst the total numbers in poverty during the 1987 - 2004 on these various de¯nitions have risen markedly, the composition of the poor has also changed signi¯cantly. There is little doubt that unemployed households are the most vulnerable group of the population. Another vulnerable group has been families with youngest children less than 7 years.