WHEN IS MONEY NEUTRAL UNDER FLEXIBLE EXCHANGE RATES? 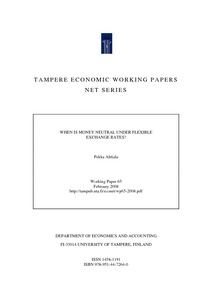 The paper studies the conditions for the neutrality of money under flexible exchange rates in an extended real-wage Mundell-Fleming model, with special emphasis on the specification of the behavior functions to correspond to their foundations in closedeconomy macrotheory. It is shown that monetary expansion causes output first to decline, to eventually rise above its original level. However, if interest earnings on foreign securities dominate the trade balance in the expression for the exchange rate, monetary expansion leads to an appreciation of the exchange rate, while having an expansionary output effect.

Money is neutral in the long run if either the wealth effect or foreign interest payments is abstracted from; if both are abstracted from, it is neutral also in the short run. Short and long-run neutrality results also if wealth consists only of foreign securities. The above responses hold both for net creditors and ­ with a minor qualification ­ debtors.