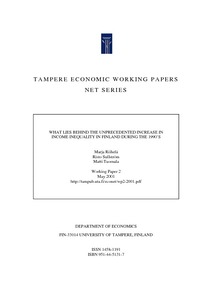 This study uses a decomposition analysis of income inequality by income groups and income sources to understand and explain the inequality increase in Finland during the 1990\'s. Several conclusions can be drawn from our results. Total inequality rose significantly during the latter part of the 1990\'s. The results suggest that capital income is the most significant contributor to overall inequality in Finland. As a general pattern inequality rose proportionately more within those socio-economic groups with growing capital income share. The 1993 tax reform, a so-called dual income tax system, is undoubtedly one of key factors responsible for this trend. Rising unemployment in the early 1990\'s, perhaps surprisingly, did not just increase income inequality. More importantly, the numbers of the unemployed below the poverty line (50 per cent of national average income) have risen from 1994. One of the most striking findings of our study is that since 1991 there has been a declining trend in the average real disposable income of unemployed households. The paper also shows that the redistributive impact of taxes and transfers has declined during the 1990\'s.