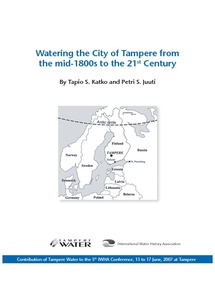 The history and development of Tampere, the biggest inland city in the Nordic countries, have been shaped extensively by issues related to water and water management over the years. The city was established along rapids that cut their way through the glacio-fl uvial esker between two large lakes some 7 500 years ago (Tikkanen 2006). Tampere is the city with the longest history of modern industrial enterprises in Finland, and it is currently known for its high-tech industries, including the research centres of Nokia, the world’s largest manufacturer of mobile devices. The company has its origins in the industries established downstream from Tampere in the neighbouring municipality ­ Nokia. Tammerkoski Rapids and its banks were a favourable location for a town due to the available water power and the lakes suitable for waterborne transport.

In the beginning of the 19th century, peasants built a channel in the upstream part of the rapids; a cotton mill and an engineering works were founded in the early 1820s followed later by other industrial activities. As early as in the 1830s, water was pumped from the lake above the City of Tampere and led via a wooden pipe to the centre. The fi rst, bigger water works and sewerage system was started in the early 1880s while the highpressure system followed in 1898. The fi rst phase of a piped sewerage system was completed in 1894. By the 1950s and ‘60s the waters upstream and downstream from the City of Tampere had become deteriorated but the introduction of effi cient water pollution control allowed them to recover surprisingly fast. Groundwater utilization was suggested in the 1910s and has been implemented to some extent since the 1950s ­ to be possibly followed by artifi cial recharge in the early 2010s.

Presently interest towards long-term experiences and water history seem to be increasing worldwide. We hope that this case of one city up North could, for its part, remind of the necessity and need to explore the history of water and sanitation in all cities and communities of the "global village" and promote comparative studies for a better understanding of the applicable key principles and practices.