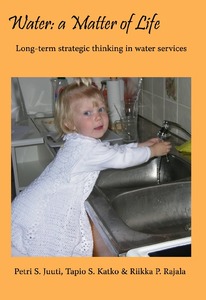 Water is a matter of life. At its 58th session, the United Nations General Assembly adopted a draft resolution, without a vote, proclaiming 2005 to 2015 as the International Decade for Action ­ Water for Life. This recommendation, which came at the close of the International Year of Freshwater 2003, called for a greater focus on water-related issues and for actions to ensure the participation of women in water-related development efforts. It also recommitted countries to achieving the water-related goals of the 2000 Millennium Declaration, the 2002 Johannesburg Plan of Implementation and Agenda 21. The Decade is to focus on water-related issues at various levels and on the implementation of programmes and projects, and the furtherance of cooperation on all levels, in order to help achieve the internationally agreed water-related goals. The goal is to halve by 2015 the proportion of people unable to reach or afford safe drinking water who also lack access to basic sanitation.1 We, the editors, think that the goal is justified on many grounds although it is unlikely to be achieved as such. Yet, we remain hopeful that the goal will for its part help provide the necessary water and sanitation to as many people in the global village as possible. This is the second time that water issues have been highlighted as part of a UN Decade. The UN declared 1981-1990 as the International Drinking Water Supply and Sanitation Decade with the aim of providing safe drinking water and adequate sanitation systems for all people by 1991. The official start of the ‘Water for Life’ Decade was on World Water Day, 22 March 2005.2 In Finland water-related issues are now in good order. It is true that the relatively large water resources and small population of Finland favour the provision of water services in comparison to many other countries. On the other hand, the large number of dispersed settlements is a challenge. Yet, abundant water resources are not the determining factor behind Finland’s success in several international water and environment-related comparisons since they also take into account many other factors besides natural conditions. Issues related to the governance of water services have also been considered ­ they also constitute the special emphasis of this book and the related research project "Evolution and futures of water management: strategic decisions, challenges and effectiveness (EFWAM)".

Several international comparisons have rated Finland among the top, or as the top country, in the world in the field of water and the environment. The comparisons include the "water quality index" (www.unesco.org/water/wwap) which emphasises water pollution control and quality, the "water poverty index" (www. nwl.ac.uk/research/WPI) focusing on the availability and management of water resources, the "transparency index" (www.gwdg.de/~uwvw/icr.htm) indicating transparency and level of corruption, the "environmental sustainability index" measuring environmental protection and sustainability (www.ciesin.columbia. edu/indicators/ESI) as well as the European comparison of water pollution control called "name, shame and fame" (www.europa.eu.int/comm./environment/nsf/ index.htm). For instance, according to the Water Poverty Index (WPI) published in 2002, Finland was the highest-ranking country with a WPI of 77.9 points. The WPI evaluated performance in the following five categories: resources, access, capacity, use and environmental impact (Lawrence et al 2002). Even though the Finnish institutional arrangements may not be replicable as such, they present an example of an enabling environment for successful water governance (Hukka et al 2006). Another example of international interest towards Finnish development is the annual development report of the World Bank (2005) which monitors social equality and its development. Finland’s contribution to the report consisted of a study on factors that enabled the quick progress of Finland into an egalitarian welfare state. Similar interest has also been shown by OECD and the American Society of Civil Engineers (Heikkilä 2005). Finnish comprehensive education has also received top marks in PISA assessments (www.oph.fi/english/SubPage. asp?path=447,65535). Yet, during the compilation of this book we Finns received a reminder of how vulnerable our infrastructure can be. Although lives were not directly lost as a result of the contamination of the water supply in the City of Nokia, all the other consequences were really troublesome for the whole community. The incident proved again that all technical systems linked closely to the environment are subject to errors of various types, particularly in operation and management. An analysis of the long-term experiences and futures of the water sector has not yet been made. There is reason to believe that such a study would improve understanding and produce research-based knowledge. Research on the development and strategies of Finnish water supply and sanitation would be relevant since the country’s development in that sector was among the fastest after WW II. Besides, the tacit knowledge of the experts involved in the development is still available for analysis.

In "Water: a Matter of Life" we used primarily the New Institutional Economics Approach. The Nobel Prize Laureate Douglass C. North (1990, p. 3-4), a driving force behind the approach, defines institutional development as follows: "institutions are the rules of the game in a society, or the humanly devised constraints that shape human interaction" while "organisations are groups of individuals bound to some common purpose to achieve objectives". Using the analogy of soccer, institutions are the rules of the game while organisations are the players (North 1990, p. 3).

This book and research are also an integral part of the work of the Capacity Development in Water and Environmental Services (CADWES) team3 at Tampere University of Technology and the International Environmental History Group (IEHG)4 at the Dept. of History, University of Tampere. The aim of the former is to produce useful information about the institutional development of water services and water resources in a broad sense based on inter- and multidisciplinary research: about organisations, administration, legislation, and operating policy including official and unofficial rules. The latter team concentrates on environmental history while many synergies exist between the activities of the two teams. Water is both a global and a local issue in many respects. We hope that the following articles will further illuminate this fact. By publishing the papers as a book, we also aim to disseminate the results to promote the thinking that sustainable governance of water and sanitation systems requires long-term analysis and strategic thinking where pasts and futures influence each other.