Cost of Capital for Cross-Border Investment: The Role of Marginal and Intra-marginal Profits 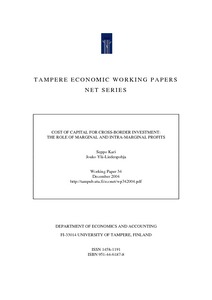 We model an investment in a foreign subsidiary, the outside finance to which is injected by its parent company from abroad. Sinn’s (1993) initial “underinvestment” problem due to taxes on repatriated dividends is argued to also concern all follow-up investments of the subsidiary financed from its marginal profits that represent the required return on the initial investment. The dividend tax capitalization hypothesis in the international context, or the Sinn-Hartman neutrality theorem, is valid only if the initial investment generates intra-marginal profits and concerns their reinvestment, the returns of which are repatriated dividends.

The results reveal that the ownership structure of the parent and the consequent tax preference for dividends affect foreign source intra-marginal profits differently from domestic source ones. In particular, the cost of capital for foreign intra-marginal profits is inversely affected by the home-country dividend tax.

We calibrate the cost of capital formulae to the parameter values of the Estonian and Finnish systems of taxing international investment income. The calculations show that the Estonian subsidiaries, paying no tax on undistributed profits but a corporate dividend tax, offer tax benefits to their parent companies only by their intra-marginal profits.