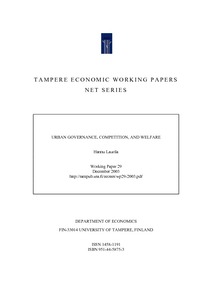 The market mechanism of spatial resource allocation is examined in a system of cities, where social welfare depends on city size. The competitive dynamics of the system is a product of the interplay between people’s individual exit type choices (migration) and their collective voice type choices (urban governance). It is shown that the use of efficiency enhancing measures of urban governance depends on the pressure of exit. A necessary condition for dynamic efficiency is that the market equilibrium of migration is non-stable, which sounds somewhat paradoxical. Dynamic efficiency is more likely to emerge between initially small cities, in which agglomeration economies dominate, than between initially large cities, in which agglomeration diseconomies dominate. The incentives for proper urban governance are somewhat ambiguous in the most relevant case, where cities are of asymmetric size. It is therefore important to strengthen the incentives by means of national urban policy.