Understanding the Evolution of Inequality During Transition: The Optimal Income Taxation Framework 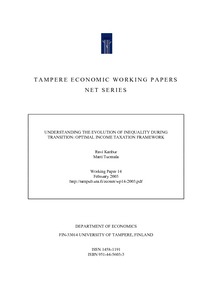 What explains the spectacular increases in inequality of disposable income in transitional economies of Central and Eastern Europe? There are at least two possible explanations. First, the pre-tax distribution of income became more unequal because of the shift to a market economy. Second, the degree of progressivity of the income tax system declined. But each of these factors is in turn determined by other structural changes associated with transition—notably, the decrease in public provision of key public goods, the decrease in non income tax revenue sources such as profits from public production, and perhaps a decline in society’s inequality aversion. This paper develops a framework in which these different forces on inequality can be assessed. Using a simple two-type and two-sector optimal income tax model with endogenous wages, we first of all show that a decrease in the provision of public goods could indeed lead to increasing “inherent” inequality, in other words inequality in market incomes. It then deploys the Mirrlees model of optimal non-linear taxation to assess the relative impacts of this increase in inherent inequality, the decreasing sources of non income tax revenue, and possible declines in inequality aversion, to get a numerical feel for their possible impacts on inequality.