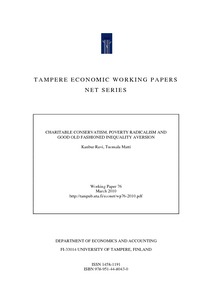 In his Presidential Address to the European Economic Association, Tony Atkinson introduced the idea of a "Charitable Conservatism" position in public policy, which "exhibits degree of concern for the poor, but this is the limit of the redistributional concern and there is indifference with respect to transfers above the poverty line." This contrasts with the perspective of poverty indices, which give zero weight to those above the poverty line, which we call "Poverty Radicalism," and with standard "Inequality Aversion" where the weights decline smoothly as we move up the income scale. The object of this paper is, first, to clarify the interrelationships between Charitable Conservatism, Poverty Radicalism and Inequality Aversion. We do this by showing how the patterns of welfare weights to which each of these gives rise are related to each other. Secondly, we are concerned to demonstrate the implications of these different views for optimal income taxation. In terms of levels and patterns of marginal tax rates, we show that Charitable Conservatism and Poverty Radicalism are on a continuum, and by choice of low or high Inequality Aversion one can approximate either outcome fairly well.