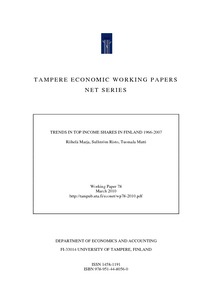 This paper provides new evidence about the evolution of top incomes in Finland over
the period 1966-2007. Using micro data we construct estimates of shares of top income
groups. The paper shows how the proportion of income earned by the very richest one
per cent has changed over time. It shows a U-shaped pattern over this period. The total
share of the highest earners fell consistently between the mid 1960s and the beginning
of the 1990s but then began to rise. The results bring out clearly how the major equalization
from the mid 1960s to the mid 1990s has been reversed, taking the shares of top
income groups back to levels of inequality or even higher found 40 years ago. The main
factor that has driven up the top one per cent income share in Finland after the mid
1990s is in an unprecedented increase in the fraction of capital income which is in 2007
62 per cent of incomes in the top one per cent group. In 1990 this fraction was 14 per
cent. Therefore the composition of high incomes at the end of period considered is very
different from those earlier years of this period. We argue in this paper that the 1993 tax
reform is one of the key factors responsible for this trend. Our results suggest that the
decline in income progressivity since the mid 1990s is a central factor explaining the
increase of top income shares in Finland.