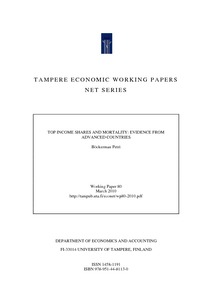 The paper examines the effect of top income shares on the crude death and infant mortality rates. We use balanced panel data that covers nine advanced countries over the period 1952-1998. Top income shares are measured as the shares of pre-tax income going to the richest 0.1%, 1% and 10% of the population. We also estimate separate effects on both female and male mortality rates. The most important finding is that there is no overall relationship between top income shares and mortality. If anything, the estimates based on gender breakdown show that there is evidence that an increase in income inequality is associated with a decrease in the crude death rate for males.