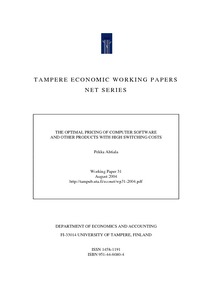 The paper studies the determinants of the optimum prices of computer programs and their upgrades. It is based on the notion that because of the human capital invested in the use of a computer program by its user, this product has high switching costs, and on the finding that pirates are responsible for generating over 80 per cent of new software sales. A model to maximize the present value of the program to the program house is constructed to determine the optimal prices of initial programs and for those upgrading their programs. It is shown that an upward shift of the demand function of upgrades leads to an increase in the optimum price of upgrades and to a decline in that of initial copies. However, and upward shift of the demand function of initial copies increases their optimal price without affecting that of upgrades. The price of upgrades is higher, the smaller (greater) the absolute value of the derivative of the initial copy demand with respect to the upgrade price (its own price), the smaller the number of pirates purchasing their initial legitimate copies and, normally, the later they do it. The prices of these goods often move in opposite directions despite the fact that the goods can best be characterized as complements. Copy-protection is generally not optimal with standard programs having competing unprotected products, and it is normally optimal to use a drug-pusher\'s strategy in pricing and in other respects: get the user hooked and cash in on the upgrades.