THE LESSON OF FINLAND S DEPRESSION OF THE 1990 S: WHAT WENT WRONG IN FINANCIAL REFORM? 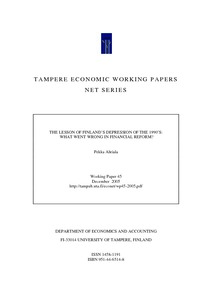 THE LESSON OF FINLAND\'S DEPRESSION OF THE 1990\'S: WHAT WENT WRONG IN FINANCIAL REFORM?*

by
Pekka Ahtiala
Department of Economics
33014 UNIVERSITY OF TAMPERE
FINLAND

The role of economic policy in Finland's depression of the 1990's is analyzed with a simple model of an open economy, and the conditions for a successful financial reform derived: Let the system adjust after the removal of interest rate ceilings, and the domestic interest rate then be aligned with foreign rates before liberalizing international capital flows. In Finland, the financial system was liberalized simultaneously with international capital movements, with the domestic shadow interest rate initially considerably higher than the international market rates. A capital inflow the size of the monetary base followed, leading to the "crazy years" of 1987-89. With a large current account deficit, the Bank of Finland tightened money sharply, causing a banking crisis practically wiping out the savings bank sector. The GDP declined by 13 %. Several lesser policy measures aggravated the crisis.