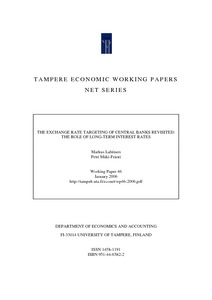 ABSTRACT
Using a New Keynesian macro model, the paper reconsiders the question, whether the central banks should directly respond to exchange rate movements. It is assumed that the transmission of monetary policy to output is carried out by the long-term interest rate, which is determined as a sum of expectations of short-term interest rates and a non-negligible term premium. The second key feature of the model is the assumption that the pass-through of the nominal exchange rate to consumer prices follows a slow distributed-lag process. According to the results, the central banks could gain from stabilizing the exchange rate movements more than suggested in the previous literature. The welfare gains are more clearly seen in the reduced volatility of inflation than stabilization of output, however.