Board Independence and Asymmetric Timeliness of Earnings in a Bank-oriented Financial System: Evidence from Finland 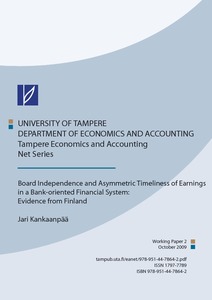 This study examines the link between the board independence and asymmetric timeliness of
earnings in a bank-oriented financial system. The models by Basu (1997) and Ball &
Shivakumar (2005) are re-estimated. This study extends prior research by Beekes et al. (2004),
Ahmed & Duellman (2007) and Garcia Lara et al. (2007) and investigates the relationship
between board compositions and asymmetric timeliness of earnings in civil law regime and
capital markets, which are commonly considered more bank than market based. Such
institutional settings exist among others, in Finland, Japan, Germany and Scandinavia.
The Finnish data serves well for this study because accounting quality in Finland is considered to
be among the highest in the world. The estimation period 2003-2005 serves well for this study,
because the renewed and highly detailed corporate governance recommendation for Finnish
listed companies entered into force in December 2003.

The results obtained using the Basu model show that bad news (negative returns) are reflected in
earnings on a more timely basis than good news (positive returns). In this respect the results are
in line with earlier findings. Unexpectedly it was found that timeliness of bad news reporting
does not depend on the number of independent directors, while the timeliness of good news
reporting does. The result can be interpreted in such a way that independent directors do not
directly increase the market reaction to good news (positive returns) but have an indirect effect
by increasing the markets` credence in the board and their reporting. The results from the Ball &
Shivakumar model indicate that, inconsistently with the Basu model, timely recognition of bad
news (negative cash flows) over good news (positive cash flows) is statistically insignificant.