Subscribing to a woman editor-in-chief? Female and male editors views on the impact of gender on careers 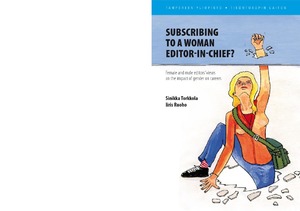 Torkkola, Sinikka
Ruoho, Iiris
Tampereen yliopisto
This publication is copyrighted. You may download, display and print it for Your own personal use. Commercial use is prohibited.

Female and male journalists have different opportunities to advance in their careers in Finland. Although about half of Finnish journalists have been women for around twenty years and the numbers of women in low and mid-level managerial positions have increased, there are fewer women than men in senior editorial posts, especially in news journalism.

This report is the English version of the Finnish interim report of the research project Equality, Journalism and the Career Progress of Finnish Women Journalists. The research examines women managers' career development in media houses and shows the overt and covert obstacles to women's career advancement. The research data consists of 43 open-ended thematic interviews of 22 male and 21 female editorial chiefs. The interviewees came from 11 daily newspapers, four news and current affairs departments in television and six magazines, two of which were women's magazines and four general interest and family magazines. The interviews firstly focused on the stories of the interviewed editorial chiefs: How the interviewees experience their careers and how they identify themselves in relation to the organization, journalistic culture and gender. The interviewed editorial chiefs were then asked the direction question of why women do not seem to advance to top positions similarly as men.

The interviews were analysed from three different perspectives: the organizational, editorial and individual perspectives. From the organizational perspective the ideals of leadership and recruitment processes open up differing positions that call on women and men to realize their careers in different ways. Gender-based specialization can be seen in journalistic culture and the practical routines which offer men and women different chances of acquiring qualifications. In the competition for the same occupational positions women journalists have to show a special competence especially in those areas of journalism that have a masculine label. The three perspectives used in this research dismantle the view that the structures and cultures of journalism only offer women a narrow victim position. Individual action is not merely seen as the result of subjective positions or choices but as interaction between individuals, structures and cultures. Thus the gendering of journalism is not tied to the gender division of journalists or the masculine practices of journalism, but to the whole socio-historical locus of journalism. In other words, one can promote gender equality by increasing the numbers of women editorial chiefs in media organizations or by changing the routines of journalistic work. However, this does not necessarily change the nature of journalism as a gendered institution.