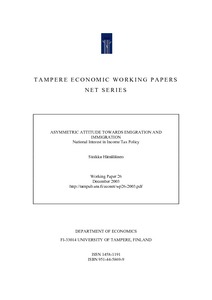 Western countries have disapproved of emigration restrictions more than of immigration restrictions. The paper uses a variant of the model of optimal income taxation under migration to seek a rationale for the prevalent asymmetric attitude. Optimal policies are derived through maximization of the welfare of the initially existing population. There are two types of individuals, distinguished by their types of labour. These individuals may migrate between two countries, "home" and "foreign". The results show that under emigration income redistribution will according to tradition be incomplete: transfer recipients will always have lower disposable incomes. Moreover, an emigrant, skilled or less skilled, will gain, otherwise he would not move. On the other hand, under immigration of taxpayers there are situations where taxpayers will have lower after-tax incomes than transfer recipients. If instead, transfer recipients are those who immigrate, optimal redistribution is conventional. Consequently, an approving attitude towards emigration is easy to understand as well as the opposite attitude towards free immigration. However, the explanation is not complete. More conclusive analytical results should be obtained.