Resource Conscious Quantification and Ontologies with Degrees of Significance 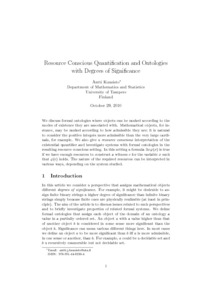 We discuss formal ontologies where objects can be ranked according to the modes of existence they are associated with. Mathematical objects, for instance, may be ranked according to how admissible they are; it is natural to consider the positive integers more admissible than the very large cardinals, for example. We also give a resource conscious interpretation of the existential quantifier and investigate systems with formal ontologies in the resulting resource conscious setting. In this setting an existentially quantified formula is true if we have enough resources to construct a witness for the quantified variable. The nature of the required resources can be interpreted in various ways, depending on the system studied.