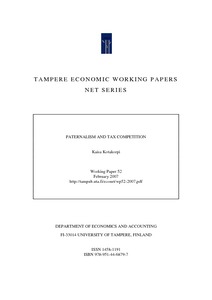 When consumers make mistakes, the government may wish to use paternalistic taxation as a corrective measure. We examine a country whose government attempts to use taxation to reduce the consumption of a harmful good, and analyse the extent to which cross-border shopping and tax competition undermine the feasibility of paternalistic taxation. We show that the paternalistic component of a tax on a harmful good is reduced due to the possibility of cross-border shopping, but it does not disappear altogether. In a model with tax competition between two countries, only one of which has a paternalistic objective, we show that there exists an asymmetric Nash equilibrium, where the paternalistic country has the higher tax rate on the harmful good. We further show that despite the divergence in policy objectives, a minimum tax rate requirement can be Pareto improving. Tax harmonisation on the other hand always reduces welfare in the low-tax country.