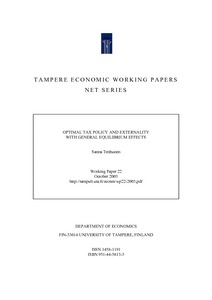 This study analyses the effect of pollution to the optimal taxation and public provision. Environmental deterioration is modelled to be created by a harmful externality of consumption. It is assumed that there are two types of households with high and low productivity, endogenous wages and a government using a mixed taxation scheme. As a result of the asymmetric information the government needs to take the self-selection constraint into account when designing the optimal tax policy. It will be shown that the social valuation of the externality consist of terms indicating the effects directed on consumers, producers, the government and the labour markets respectively. It turns out that in the consumer side the direct effect and the self-selection effect have opposite signs indicating that the environmental and the redistributive objectives are inconsistent. However, in the producer side the direct effect and the indirect effect from wage adjustment in the labour markets have both positive signs indicating consistence between these two goals of the government. Another considerable result comes from the commodity taxation: it is shown that Dixit\'s principle of targeting continues to hold unless the endogeneity assumption is enlarged to apply all factor prices.