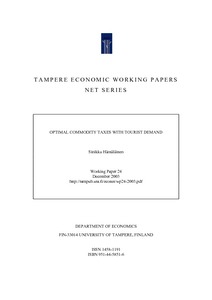 With tourism, the existence of country-specific commodities that have to be bought and consumed locally plays an essential role. The paper is about how optimal taxation rules are modified when the taxable goods include goods demanded by tourists. The main point is that tax rates can be manipulated to shift some of the tax burden from domestic residents onto tourists. There is indeed a reason why an optimum taxation approach is useful for tourism, as the goods are consumed inside the host country, and discrimination is difficult.

The paper combines several scenarios where tourism may be relevant for optimal tax policy. It begins by considering the determinants of tourist demand. Then, the well-known optimal commodity tax rules are modified to include the effect of foreign demand. Tourists are assumed to trade at the same prices as domestic consumers, but to have zero welfare weight. Thus, the government must balance the desire to tax tourists with the deadweight loss suffered by its own residents. The government should raise some taxes, when tourism begins. Tourism-oriented goods with low price elasticities should bear the highest taxes. However, tourism-related pollution cannot be taxed at prohibitive rates or tourist revenue would be lost altogether.
Possible extensions are introduced, for example competition among destination countries. Should tourism dependent countries that are geographical neighbours and substitutes have closely linked tax systems? What kind of tax policy is best when the tourist destinations serve as complements to each other?