On the shape of optimal non-linear income tax schedule 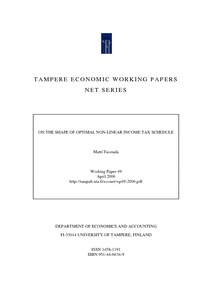 This paper shows that the assumed distribution of earning abilities (wages) plays an important role in determining the optimal shape of non-linear income tax schedule. We replace the assumption of lognormal distribution used in several papers by the Champernowne distribution. Using numerical simulations we show that the U-shaped pattern of the marginal income tax rates can be obtained without assuming constant labour supply elasticity as in Diamond (1998) and Saez (2001). Our numerical results also suggest that it is either a sufficiently high inherent inequality or a combination of sufficiently high inherent inequality and sufficiently low revenue requirement that leads to a pattern of optimally increasing marginal tax rates. Furthermore, the paper also shows that the revenue requirement has a central role in determining the extent of redistribution and the level of the guaranteed minimum income.