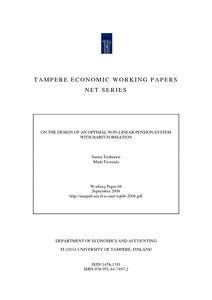 We study optimal lifetime redistributive policy in a two-period model where individuals differ in both productivity and future discounting and where their retirement period utility is dependent of the earlier standard of living, i.e. there is a habit formation effect. We consider both welfarist government respecting individual utilities as well as the case where the government aims at correcting the short-sightedness of the individuals.

The two sources of imperfect information, wage rate and time discounting, interact, so the effects cannot be separated. To consider closer the tax and pension policy and the effect of the degree of habit formation the problem is also solved numerically. We found support for non-linear pension program.