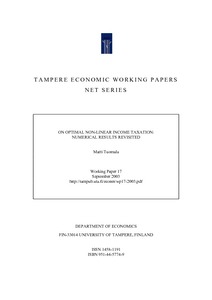 Based on numerical simulations there seems to be a kind of consensus in the optimal tax literature that the marginal tax rate should fall rather than rise with income. Retaining the same formal structure as in Mirrlees (1971) this paper shows that this consensus is sensitive to a choice of the assumed form of utility of consumption. For the utility function quadratic in consumption optimum tax schedules look rather like those traditionally chosen by governments, i.e. the marginal tax rates rise with income.