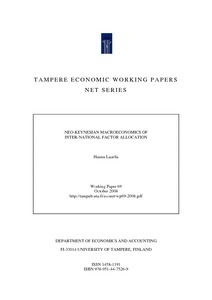 Under Adaptive Expectations, migration may act as an inter-national alternative to intra-national adaptation of price expectations in the market adjustment process. In this case, the factors are induced to move to opposite directions in order to adjust the economy to the initial shock. A positive demand shock lowers perceived real wages thus inducing emigration of labour, and makes perceived real interest rates rise thus inducing immigration of capital. The final amounts of migration depend on the relative shares of intra- and inter-national adjustment.