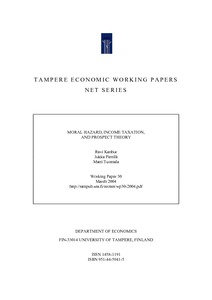 Abstract: The standard theory of optimal income taxation under uncertainty has been developed under the assumption that individuals maximize expected utility. However, prospect theory has now been established as an alternative model of individual behaviour, with empirical support. This paper explores the theory of optimal income taxation under uncertainty when individuals behave according to the tenets of prospect theory. It is seen that many of the standard results are either overturned, or modified in interesting ways. The validity of the First Order Approach requires new conditions that are developed in the paper. And when these conditions are valid, it is shown that optimal marginal tax rates on low incomes will tend to be lower under prospect theory than under expected utility theory.