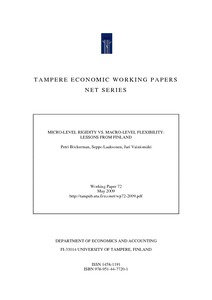 This paper explores the wage flexibility in Finland. The study covers the private sector workers by using three data sets from the payroll records of employers' associations. The data span the period 1985-2001. The results reveal that there has been macroeconomic flexibility in the labour market. Average real wages declined during the early 1990's depression and a large proportion of workers experienced real wage cuts. However, the evidence based on individual-level wage change distributions shows that especially real wages are rigid. In particular, individual-level wage changes have regained the high levels of real rigidity during the late 1990s that revailed in the 1980s, despite the continued high (but declining) level of unemployment.