MEASURING THE HIGHWAY CAPITAL IN FINLAND 1900-2009 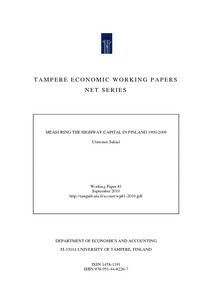 In this study, the values of the wealth and productive services capital stocks in Finland between 1900 and 2009 are estimated. Several modifications to the prevailing conventions of measurement are suggested.

First, the sudden death (one hoss shay) deterioration of the asset is the justifiable deterioration pattern in this context. Renovation investments that preserve the e±ciency of the asset must explicitly be attached to the fundamental equation determining the asset price but they must not any more be included as separate investments in the estimate. With these modifications the wealth capital stock of highways obtains the value of 43 billion euros in 2009, the "official" figure being only 15 billion euros.

Secondly, the competitive market hypothesis in the case of infrastructure investments is questioned. Using a typical cost-benefit rule and parameter values applied in project appraisals to estimate the value of the expected benefits of a typical highway project, the wealth capital stock of highways obtains the value of 170 billion euros in 2009.

Thirdly, new road investments have a positive external effect on previous investments in improving the performance of the whole network. Using a spatial accessibility index and its changes to estimate the intensity of the external effects, the wealth capital stock of highways reaches the value of 200 billion euros in 2009.