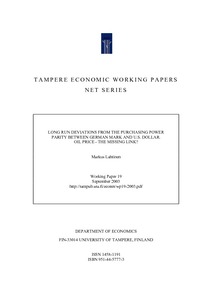 The aim of this paper is to identify and investigate empirically the long-run determinants of real exchange rate fluctuations between Germany and the United States since the collapse of Bretton Woods system This study uses the multivariate cointegration technique to find steady state relations of real exchange rates. Possible I(2) property of the data generating process is also examined using the latest statistical tools.

Number of studies have furnished fairly persuasive evidence that the deviations from purchasing power parity (PPP) derive in large part from differences in relative traded goods prices especially if the U.S. dollar is included into the estimation vector. These findings have led some researcher to suggest that there might be an unidentified real or financial factor causing persistent shifts in the real exchange rate. In this study we have used a more explicit explanation for this exchange rate shock. Real oil price is shown to be an important factor modeling the real exchange rate movements between German mark and U.S. dollar. In the presence of sunk cost of arbitrage uncertainty as to the permanence of the shocks causing relative price changes will widen the range within which price differentials can fluctuate and also increase the time before arbitrage commences. Oil price is shown to be the important source of uncertainty, which will appreciate US dollar without the price arbitrage of tradable goods. When the oil price shock is included into the estimation vector, we can also identify the classical Harrod-Balassa-Samuelson condition not generally found in literature between the German mark and the US dollar.