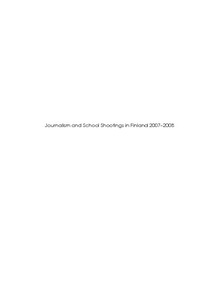 Two school shootings in Finland (Jokela in 2007 and Kauhajoki in 2008) resulted in the death of 20 people, and they shook not only the foundations of Finnish society but also of the profession that reported about the tragedies.
This report is based on research conducted on school shootings at the University of Tampere Journalism Research and Development Centre between 2008 and 2009. The analysis concentrates on both the journalistic texts published on the shootings and journalists' actions on the scene. Special attention is given to issues that were considered particularly problematic, such as the portrayal of the shooters in the media, and how to approach victims, their families and the eyewitnesses.