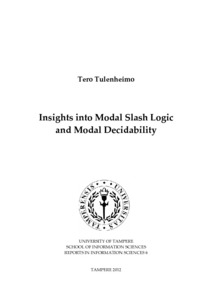 The present paper has a two-fold task. On the one hand, it aims to provide an overview on Independence friendly modal logic as defined in (Tulenheimo, 2003; Tulenheimo, 2004) and studied in a number of subsequent publications. For systematic reasons to be explained, the logic is here referred to as modal slash logic (MsL). On the other hand, we take a close look at a syntactic fragment of MsL, to be termed MsL0, first formulated in (Tulenheimo and Sevenster, 2006). We push the study of this logic deeper at several points: a model-theoretic criterion is presented which serves to tell when a formula of MsL0 is not truth-equivalent to any formula of basic modal logic (ML); the game-theoretic property of ‘bounded quasi-positionality' of MsL0 is studied in detail; an alternative syntax for MsL0 is discerned and the logic obtained is shown to enjoy the property of quasi-locality (generalizing the notion of locality familiar from ML); and we formulate an asymmetric bisimulation
concept and use it to prove that MsL0 is not closed under complementation. Drawing from insights provided by the study of MsL0, we conclude by general observations about claims made on the ‘reasons' why various modal logics are computationally well-behaved.