A Note on the Two-Sector Model of Regional Factor Allocation 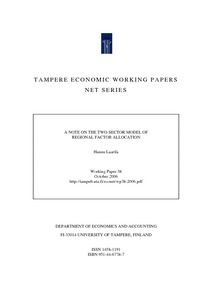 The standard neoclassical Two-Sector Model of inter-regional factor allocation says that a positive demand shock in one region starts immigration of both labour and capital into the region, but that the market adjustment eventually ends in re-equalisation of the factor rewards thus reproducing the inter-regional equilibrium. The issue is here examined in a Neo-Keynesian macroeconomic framework. In the present model, the demand shock does not trigger factor movements into the same direction like the Two-Sector Model postulates. Under Perfect Foresight or under Rational Expectations the factors do not move at all. Under Adaptive Expectations the factors are induced to move in the short term. However, the factors move in opposite directions: a positive demand shock causes capital to immigrate, but labour is caused rather to emigrate than immigrate. Whether the factors migrate or not depends on the relative sensitivity of the alternative adjustment mechanism, namely the within-region adaptation of the factor suppliers’ expectations.