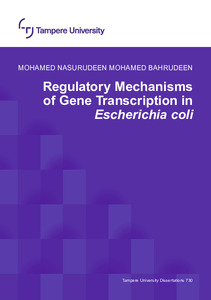 Bacteria have always been exposed to a wide variety of environments, many of which are fluctuating. In order to survive in these environments, they have had to develop the ability to adapt to changing conditions, particularly hostile ones. The adaptiveness of these microorganisms primarily depends upon their gene regulatory mechanisms. Some of these are ‘local’, affecting only a few genes. For example, when a specific nutrient appears in the media, it activates a few genes. Other regulatory mechanisms are more complex, involving a large number of genes that need to be activated and/or repressed at specific time moments.

The survival of bacterial species, in some cases, depends on the existence of diversity in their genes’ expression across the cell population, particularly since it is not always possible to predict the best action to take next. Understanding the mechanisms of bacteria that regulate the diversity in gene expression would help the bioindustries to benefit from them. Moreover, it would help finding ways to mitigate the harm caused by some species.

Bacterial genes are primarily regulated by their promoter strength in recruiting RNAP and specificity to a σ factor and, in some cases, by one or more global regulators. In addition, many genes are also regulated by specific transcription factors that can act as activators or as repressors, when present. Aside from these, other influential factors are the supercoiling in the DNA region occupied by the gene, whether there are other promoters closely spaced to the promoter of interest and, if so, their orientation, etc (Dash, et al., 2021).

First, we studied how the intrinsic and extrinsic sources of noise in gene expression could be regulated by tuning the relative duration of transcription initiation. The study was done using stochastic models. It was found that the diversity in transcription kinetics across a cell population increases with the increase in the relative duration of the closed complex formation.

Second, a method was proposed to dissect the kinetics of transcription locking due to the effects of positive supercoiling buildup. Using RNA fluorescent protein tagging and microscopy, RNA transcripts were quantified in individual cells. It was found that increasing intracellular gyrase concentration decreases how often a promoter goes into the locked state, which in turn increases the gene’s transcription rate. Using that information, it is possible to infer how long the promoter is locked.

Third, a method was proposed to quantify the RNA numbers in individual cells using information from flow cytometry. This method allows the quantification of RNA numbers in thousands of cells, and thus the mean and variability in those cells, with much less manual labour and in much lesser time than when using microscopy and image analysis.

Overall, the four studies above allow for, first, better extracting raw data from microscopy and flow cytometry, and from there, to either dissect the kinetics of rate- limiting steps during transcription initiation or, inversely, how they can be tuned to regulate the single-cell RNA and protein numbers.

Having studied two core mechanisms regulating transcription, the fifth and final study focus on a third mechanism, which is transcription factor (TF) regulation. For this, we used RNA-seq to study how RNAP and TFs affect the kinetics of gene cohorts from measurements after RNAP shifts. We found that the magnitude of genes’ response is proportional to the asymmetry in the number of activators and repressors regulating them.

Overall, the works conducted in this thesis show that the gene expression and its
products diversity in cell populations can be regulated by varying the rate-limiting steps in transcription. These rate-limiting steps can be tuned by various mechanisms, such as the tuning of the accumulation of positive coils, tuning transcriptional interference of closely spaced promoters in tandem orientation and, tuning which and how many transcription factors act on each gene.