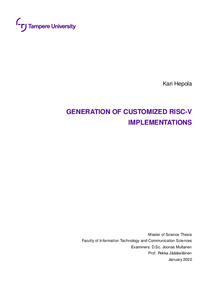 Processor customization has become increasingly important for achieving better performance and energy efficiency in embedded systems. However, customizing processors is time-consuming and error-prone work. The design effort is reduced by describing the processor architecture with high-level languages that are then used to generate the processor implementation. In addition to processor customization, open source hardware and standardization have become increasingly more popular. RISC-V that is a relatively new open standard instruction set architecture, has gained traction both in academia and industry.

The RISC-V generator developed in this thesis has customization points for the bypass network, amount of pipeline stages, operation latencies and an optional addition of the standard M extension. The generator was evaluated by generating RISC-V cores with different customization points and comparing their performance and post-synthesis properties with open source implementations. The generated cores with bypass network achieved better performance while consuming slightly more area than the smallest reference design. The microcode hardware only utilized 3.6% of the design area and did not affect the maximum clock frequency.