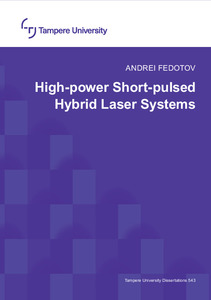 Ultrafast ﬁber lasers have found wide application in medicine, biology, and ranging. Their high-power counterparts are vital for high-precision material processing, light frequency conversion, and optical parametric oscillator (OPO) pumping. This thesis concerns the research and development of a high-power ultrafast laser system in a master oscillator power ampliﬁer (MOPA) conﬁguration. It is based on a gain-switched laser diode (GSLD) acting as a seed laser and an active tapered double-clad ﬁber (T-DCF) operating as the main ampliﬁer.

The active T-DCF operating as an ampliﬁer was applied for power scaling in MOPA system. Two new types of active tapered double-clad ﬁbers were manufactured. The main accent was made on the ampliﬁcation of polarized radiation. The ﬁrst type was PM T-DCF and utilized the traditional approach of creating high birefringence in the cladding by adding borosilicate rods. The second type (spun T-DCF) was made to emphasize minimizing the magnitude of birefringence by fast rotation a preform during ﬁber drawing since it was demonstrated that stress-induced birefringence in PM T-DCF signiﬁcantly affects the state of polarization under intense pumping. A comparative study of the state of polarization drift in various types of T-DCF has been carried out. Spun T-DCF was found to be less sensitive to the pump-induced heating and better preserves the state of polarization at high power than PM T-DCF. The inﬂuence of the geometry of the spun T-DCF on the ampliﬁcation properties and the quality of the output beam has been shown. Excessive twisting of spun T-DCF leads to mode coupling in the core and deterioration of the mode composition, as well as to pump vignetting and degradation of the amplifying properties. Insufﬁcient twisting, in turn, does not provide effective mixing of cladding modes and also impairs the amplifying properties. It was demonstrated that for a spun T-DCF with a certain geometry the optimal pitch length can be found at which its ampliﬁcation properties are comparable to those of PM T-DCF while polarization stability is better.