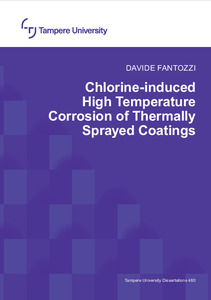 Society is becoming more aware of the climate change issue and legislation has been put in place to reduce CO2 emissions. The energy industry is making big efforts to phase out coal by replacing it with opportunity fuels such as biomass and waste. The combustion of biomass and waste in boilers often causes the release of corrosive chlorides inside the boiler. As they are deposited on the surfaces of heat exchangers, they can cause severe corrosion damage, by an accelerated mechanism known as “chlorine-induced active corrosion”. Moreover, material degradation is often exacerbated by erosive solid particles present inside the boiler. The application of protective coatings is a common procedure to reduce material wastage and increase a component’s lifetime. Nickel-based Alloy 625 thermally sprayed coatings are a common solution for corrosion protection when hardmetal coatings are used in erosive environments in boilers. Although the mechanism of high-temperature corrosion has been widely studied, the way it takes place in the complex microstructure of thermally sprayed coatings is still unclear. To investigate these aspects, the present research aims to correlate the microstructural properties of thermally sprayed coatings with their high-temperature corrosion behaviour. The coatings were studied in laboratory using an oven test and thermal analyses under KCl deposit and on a full-scale boiler using an air-cooled probe.

Multiple microstructures types for Alloy 625 were obtained by depositing the coatings with different thermal spray methods such as HVOF, HVAF, TWAS and CS. All of the Alloy 625 coatings showed excellent corrosion resistance. Microstructures with intersplat interfaces without open porosity were shown to have a great beneficial effect on protection. Such features were achieved by high levels of particle melting, which was obtained by the TWAS and HVOF processes.

In some situations, both erosion and corrosion resistance is necessary. Carbide- based materials are regarded as highly resistant to erosion wear. However, their corrosion rate is known to be accelerated by chlorides. Specifically, because of the melting of feedstock particles during the spray process, carbides will dissolve into the metal matrix in a metastable form. Exposure to high temperature will cause their precipitation into a network of fine secondary carbides, which will quickly corrode under KCl deposit. Spray methods with parameters enabling low melting of particles were beneficial in reducing secondary carbide precipitation, thus corrosion damage. A corrosion mechanism was suggested to describe this phenomenon under concentrated KCl deposits. In fact, in a boiler, the corrosivity of the ash deposit is lower than that of concentrated KCl due to the presence of compounds such as, for example, carbonates and sulphates, which at the test temperatures are not highly corrosive. In such a case, the secondary carbides have time to ripe and become less vulnerable to accelerated corrosion. Nevertheless, carbides remain highly reactive to KCl and their safe applicability, as measured in this work by TGA, oven tests and a field test, should be limited to temperatures below 450 °C or 500 °C, depending on the specific coating composition and spraying method.

The instability of carbides creates the need for a more resistant hard phase replacement in thermally sprayed hardmetal coatings. For this, oxides are a possibility due to their hardness and alleged inertness. However, the mechanism of chlorine- induced active corrosion demonstrates that oxides could be attacked by KCl at high temperatures, too, to form oxometallates such as chromates. Therefore, multiple commercially available oxide feedstocks, which already have some high temperature applications, were sprayed by APS and HVOF to study their reactivity in chlorides. The possibility to use them as standalone coatings or as reinforcement in hardmetal coatings was discussed as well. Among them, chromia was highly corroded by KCl due to the formation of a low melting eutectic compound with KCl. A small amount of TiO2 significantly increased its stability. Al2O3-ZrO2 was inert in all of the studied temperatures up to 720 °C.