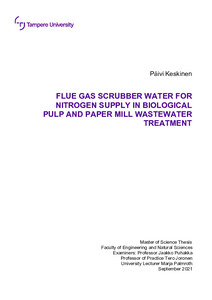 Efficient chemical and biological oxygen demand removal (around 80 % and 98 %, respectively) were obtained in both reactors and dissolved nitrogen did not accumulate in the effluent. However, in reactor 1 decreased sludge flocculation, decreased sludge settling properties and elevated total soluble solids concentration of effluent was noticed in comparison to performance of reactor 2. During the last two supplementation phases (nitrogen supply 29.5 mg/L in influent), a significant increase in the presence of filamentous bacteria occurred in both reactors.

Denitrification as an alternative scrubber water treatment method was studied with batch bottle assay. Synthetic scrubber water containing 1000 mg/L of nitrate and five different concentrations between 0 and 2000 mg/L of chloride was used. Methanol was used as an electron donor with carbon to nitrogen ratio 1.7 and a denitrifying sludge sample of a municipal wastewater treatment plant was used as a source of microorganisms. Complete denitrification was obtained at 35 °C within 110 hours regardless of chloride concentration.

According to the study, flue gas scrubber water could only partially replace conventional nitrogen supplements in pulp and paper mill wastewater treatment as urea was found to be important to sludge quality. Further studies may be needed to study more carefully the effect of nitrate and nitrite on activated sludge quality and settling properties. Denitrification could be used as an alternative nitrogen removal method for flue gas scrubber water if it contains inhibitive compounds under threshold concentrations known for denitrification. Detailed analysis of flue gas scrubber water of pulp and paper mills would give useful information for future studies.