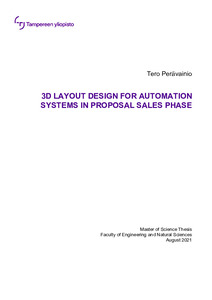 Three-dimensional (3D) software models are becoming more mainstream as deliverables. A demand for 3D solution layouts for automation systems in manufacturing has existed for a while now. Solution layouts are created in proposal sales phase to check that requested system is possible, reasonable and to provide visual support considering sales. The main goal of the Thesis was to identify benefits and limitations that 3D design can offer for this application. The research was set to find out how 3D is used in solution layout design already and how far 3D layouts could be automated. Component library requirements, needed accuracy and improving proposal layout usage in project phase were also to be investigated.

Research approach was the following. First current 3D layout generation was analyzed. Based on previous development projects and their results, the challenges facing 3D design development in solution layouts were identified providing a good basis for selecting methodology. Research methods selected were specialist interviews and model development. The interviews aimed to reveal opinions and knowledge about layout design that is usually not collected in any form. For development phase the goal was to create a 3D model that could be used for making simple flexible manufacturing system (FMS) layouts. Lastly, the development phase implementation was planned on a general level.

In the implementation phase, a series of specialist interviews were held, and a lot of data was received on various subjects regarding 3D layout design. Main consensus from the interviews was that moving to 3D layouts is realistic if a suitable design software is found. Biggest concern was said to be that it takes more time to create a 3D layout than a two-dimensional (2D) one. After reviewing interview data, the development phase was started. The development consisted of component modelling, script writing and model testing.

As a result, from development, a working model was achieved and the set goals for the model were fulfilled. Simple layouts can now be created in 3D for proposal usage. Several features outside of the original scope were also created making the model usage more convenient. The development process and further implementation of the 3D layout model will be continued in the future to allow more complex creations.