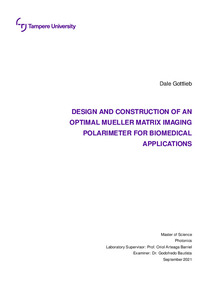 A new method for optimizing rotating compensator polarimeters based on the implementation of an elliptical retarder made by placing two linear retarders at an angle offset is formulated. By adjusting the angle between the two retarders, the linear retardance can be adjusted to the optimal value of 132deg, achieving a condition number of sqrt(3) over a broad spectroscopic range. This elliptical retarder design is first experimentally demonstrated on a Mueller matrix imaging polarimeter in a back-scattering configuration capable of measuring in-vivo tissue samples over a broad 300 nm wavelength range. The setup is shown to be capable of measuring the orientation of collagen fibers on the surface of skin, and has a standard deviation of < 0.01 for all Mueller matrix elements after repeated measurements. A second polarimeter design also utilizing the elliptical retarder is presented that uses a polarization sensitive camera that detects the first three Stokes components simultaneously and is able to measure the top three rows of a Mueller matrix in only N = 4 measurements, offering significant temporal resolution improvements.