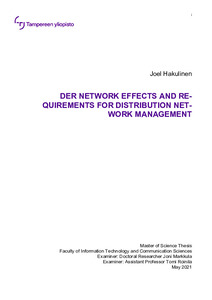 An increasing amounts of distributed energy resources such as distributed generation and electrical vehicles are connected to the distribution networks. While they have a positive impact on the environment when considering the emissions, they can be detrimental to the stable operation of the networks. The most common renewable energy sources, solar and wind power, are intermittent due to their weather dependency. This unpredictability of production makes it harder to balance the electrical energy production and consumption in the network. When a mismatch happens, such as the production being locally larger than the consumption, network bottlenecks can occur. The bottlenecks, such as component overloading, can lead to the curtailment of generation and lost production as well as component failures. In order to avoid bottle-neck situations in Germany, redispatching of power plants is used, which means that generation of power is temporarily shifted from one location to another. Often this requires reserve power plants fueled by traditional power sources, which can be expensive.

In addition to effects resulting from distributed generation, the new loads such as electrical vehicles can also cause network bottlenecks. The electrification of the transport sector is happening rather quickly, which means that a lot of new loads may soon appear in distribution networks. The charging power electrical vehicles can be in the range of 2-10 kW even at standard home charging, which means that the increase in local peak loading can be quite clear. The addition of such loads can cause additional voltage drops and lead to lines and transformers overloading.

The distribution management system MicroSCADA X DMS600 by Hitachi ABB Power Grids can be used for network planning as well as for real-time operation of a distribution network. User interviews were conducted to find out the DER related needs of DSOs. Needs were brought up regarding existing functionalities and also the important future topics were identified. From the existing functionalities, the documenting of LV generators needs improvements in order to make the process simpler and remove the risk of breaking load flow calculations. The most important improvements were related to switching planning as the automatic sequence creation should be able to handle the automatic separation of possible backfeeds caused by distributed generation.

Electrical vehicles were considered a more realistic risk to the network than excess distributed generation by the interviewed Finnish DSOs. It was also noted that the tools for analyzing possible DER effects are quite limited and often have to be created by the DSOs themselves. In order to answer to this need, a prototype for simulating EV loading was created. First an EV load model was created with a C# program that used national travel survey data as basis for modeling charging behaviors. The program outputs a load curve based on the common driving schedules, averages durations and average lengths of the trips. The model was simplified as only each vehicle only did one trip from and back to home, and the vehicles were only charged at home with a power of 3 kW. The resulting load curve was used to insert new load points into the network model. The loads were connected to existing customers and therefore the existing customer data in the network did not have to be modified at all, but the load flow calculations still could show the combined effect of the customer and the vehicle.

The prototype can give a rough idea on possible EV effects. For example, some transformers are easily overloaded, whereas excessive voltage drops may require a very high penetration rate. The implemented violation list can be used to easily detect even remote transformer overloads. The prototype shows that a functionality for EV modeling could definitely be implemented.