Choosing Between One Evil and Another: The Motivations of Let’s Players 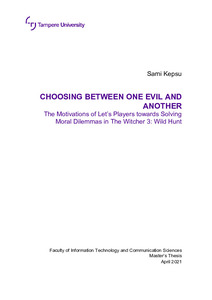 The aim of this thesis is to find out what kinds of motivations players have towards solving moral dilemmas they face within video game narratives. More specifically, this thesis focuses on a particular group of players called Let’s Players, who record their gameplay and provide a voice commentary narrating their play, either livestreaming these playthroughs or uploading them to video sharing platforms such as YouTube. The performative and social aspects of Let’s Players distinguish them from the solitary play of most players making moral choices, and this thesis seeks to determine whether this also affects how they approach those moral dilemmas within video game narratives.

Moral dilemmas within video games narratives have received a fair share of criticism, being perceived as shallow and lacking the ability to offer the player a chance to truly reflect on their actions. In addition, as no real, living creatures are affected by the player’s actions, the applicability of moral concerns is questionable. There are opposing views to this as well, seeing play as a part of the moral development of a player. This thesis strives to ascertain whether Let’s Players do express moral focus and reflection towards moral dilemmas in their playthroughs, or if they are motivated by non-moral concerns.

The research was conducted as a thematic analysis of 20 Let’s Players’ playthrough of two side quests in the action-RPG video game The Witcher 3: Wild Hunt, whose narratives involve moral dilemmas that the player must solve. The game was chosen for this thesis mainly because the moral dilemmas in its narrative were generally praised in the game’s reviews. The narration of the Let’s Players was first transcribed and then coded based on what motivations the Let’s Players were expressing towards solving the moral dilemmas they were facing. These codes could then be collated into overarching themes that consisted of moral motivations, non-moral motivations, and co-reflection, which stands for a kind of collective reflection and decision making between the Let’s Player and their audience.

The different motivations that could be identified from the sample group were self-reaction, role-playing, curiosity, rewards, and co-reflection. Additionally, I argue that the design of the moral dilemmas is crucial in determining whether a morally motivated player is able to act in a way that they deem is the most morally just cause of action. The game design issues prominent in the playthroughs of the sample group Let’s Players were the unintentional commitment to a decision in a moral dilemma, being forced to make a decision before they were ready to commit to one, and restrictions to how non-playable characters involved in the moral dilemma could be interacted with. The results of the research suggest that Let’s Players can have several motivations, both moral and non-moral, towards moral dilemmas they face within narratives of video games, changing from moment to moment and sometimes even having several motivations at once which might be in conflict with one another. Furthermore, Let’s Players are able to involve their audience in the decision-making process, sometimes even leaving it completely up to their audience.